Grace and her friends certainly believe in the power of rock and roll—it’s what they will experience later this year in the upcoming book Grace’s Rock and Roll Adventure. And we’re really excited about the partnership that has taken shape because of and behind the book.

The Rock and Roll Forever Foundation

You probably know musician Steven Van Zandt first as guitarist for Bruce Springsteen’s E Street Band, or as Silvio Dante, the supporting role in The Sopranos. But he’s got a philanthropic side, too. His mission, through The Rock and Roll Forever Foundation and TeachRock, is to use rock and roll to empower teachers and engage and inspire kids—and keep them in school. TeachRock gives teachers and students rich, multimedia educational materials everywhere—at no cost. The lesson plans connect the history of popular music to classroom work across disciplines, from social studies to language arts to geography, science, and more.

And, starting this September, Grace’s Rock and Roll Adventure will be part of 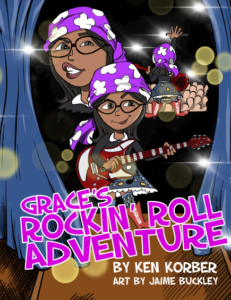 TeachRock in select elementary classrooms in New Jersey, as well as in select schools in Chicago.

A big first for Grace

Up until now, Grace has been learning about music, but she hasn’t chosen an instrument herself. However, Grace’s Rock and Roll Adventure changes all that. In the book, her class wins a prize to attend a concert where Steven Van Zandt’s band is playing. At the end of the concert, he gives her an electric guitar. With it, she is inspired to learn about rock and roll and become a musician herself.

A star in the storyline

As an author and entrepreneur, I’m always incubating new ideas. One I had early on was to actually feature Steven Van Zandt in the story. I didn’t know if he would actually agree, but I thought it was worth the ask.

As it turns out, he DID want to be in the story! After he agreed, we developed a draft character for him and sent an illustration for review. We were prepared for a long, iterative process—but he had only one small change to make.

As you can tell, we’re very excited about our partnership with the Rock and Roll Forever Foundation. Ideas for other ways in which this storyline could ultimately develop are already taking shape. Curious about them? We’ll share more when the time comes, but we can tell you they’ll be in our sweet spot of literacy, health, and music education.

With so many possibilities percolating for Grace and the Center for Functional Learning, I’ve been thinking about partnership. I always look for interesting combinations that might not normally be considered

interesting on the surface. After all, what can music educators, clinicians, and consumers have in common? (Lots, as it turns out.)

The key to developing something new and different has been building the right teams. This is a thread woven through my diverse career experiences. As a physician assistant, I always had to be a team player with a physician. As a medical science liaison for a drug company, I built teams in the field for trials. In medical education, I found teamwork integral to panel discussions and other thought leadership. Now, I’m creating alliances between foundations and other companies for newly bundled ideas and products. To me, it comes down to having an endless appetite for asking and answering “what if” questions.

Perhaps the biggest “what if” question of all will come after Grace is well on her way into her rock and roll adventure. Where in the world will this all take Grace next?